The NZ Herald today reported on vehicle safety relating to older cars. The AA claims there are many safe used car options under $10,000, but it all looks quite subjective with no mention of ANCAP safety ratings.  They make some good points though, particularly the comment that the probability of being killed or seriously injured in a 1996 vehicle is 50% higher than the same accident in a new car.  So here it is in full on p3 NZ Herald this morning – Safer Cars Can Come Cheap.

People looking for a safe car but can’t afford to prise open the purse strings too far will be pleased to hear some of this year’s top-rated vehicles can be snapped up for less than $10,000.

And this year the standards are tougher than ever with hospital records from crashes being included in the data.

More than 250 models made since 1996 were assessed for this year’s Used Car Safety Ratings (UCSR) guide but just 28 cars earned the Safe Pick standards while more than a third had a poor or lower rating and shouldn’t be considered a safe purchase.

The Automobile Association’s motoring services general manager Stella Stocks said on average someone was 50 per cent more likely to be killed or seriously injured crashing a car built in 1996 than one from 2014 so being aware of the safety rating could “make all the difference”.

“With the introduction of tougher safety standards for new vehicles and improved safety design features across the board, we’re seeing the safety of New Zealand’s used car fleet improving.”

This year 115 vehicles received an excellent or good rating for occupant protection in a crash but 96 models were considered poor or very poor.

The guide included of hospital records from New South Wales for the first time which was used alongside real world data from more than 7.5 million road crashes in New Zealand and Australia and more than 1.7 million injured people.

The ratings were calculated using an internationally reviewed method and were influenced by the vehicle’s mass, the structural design of the body and the safety features fitted to the vehicle, such as airbags and types of seat belts.

It also took into account the types of people who drove different cars but as far as possible the analysts looked at how the vehicle contributed to injuries in the crash, rather than the driver or where it was.

But Stocks said the guide also showed there were safe choices available at every point in the market. “A large number of the vehicles with excellent ratings are available second-hand for less than $15,000 and many for less than $10,000.” On TradeMe yesterday afternoon, there were 42 listings for one of the models with a Safe Pick – the Mazda Rx-8 – being sold for $10,000 or under. To see the full 2016 Used Car Safety Ratings guide visit www.aa.co.nz/UCSR2016.

OR watch the definitive evidence on video at https://crashmanagement.co.nz/technical/ .  Fortunately, there aren’t many 20 year old cars remaining in business fleets anymore… 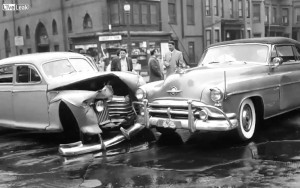